The Hungarian Chamber of Agriculture (NAK) has been an active member of the i2connect H2020 international project as a consortium partner for two and a half years. The project, which started in November 2019, addresses agricultural advisors building on the already existing advisory networks and realized success stories, with an approach in which innovation is a bottom-up initiative. Particular emphasis is placed on the fact that advisors initiate and participate in more and more European Innovation Partnership (EIP) projects in the future.

One of NAK’s tasks in the i2connect project is to identify domestic “innovation advisors”, map their skills, understand their operation, role and key competencies, and also organize trainings, study tours and so-called cross-visits in the project.

As part of one of these commitments, in May 2020, NAK announced a tender for domestic advisors to participate in the i2c Train the Trainer (TTT) program, where two advisors (Tibor Bányai and Arnold Gór) were selected, who took part in a five-day international training course for trainers in October 2021 in Dublin, Ireland, undertaking to pass on the knowledge and experience gained there to their Hungarian colleagues. The domestic knowledge transfer took place in Gödöllő and Dunaharaszti in the framework of a 2 times 3-day training, with the participation of about 30 people. The short film below summarizes the results of these two training sessions.

In the framework of the other undertaking, 3 advisors with excellent English skills (higher level language exam) were selected from among the participants in the above training, with the help of the trainers, who took part in the cross-visit based on Bavarian practice organized in Niederalteich at the beginning of August 2022.

The primary goal of the international meeting was to recognize and analyse the elements of the innovation process through the presentation of a local interactive innovation, based on a given methodology. In the framework of this, in the advisory service and in project management, useful knowledge transfer and information sharing techniques as well as analysis techniques have gained a prominent role. German, Irish, Polish, Greek and Hungarian advisors participated in the cross-visit.

In our article, we would like to present the experiences and thoughts of the three advisors (Erika Andrási, Ferenc Kósa, Miklós Sörfőző) regarding the cross visit.

The professional program was held between 2-4 August, on the first day of which, after the introduction and getting to know each other, the project of Farmtastic Consulting GmbH was viewed in Irlbach. The consortium participants implemented the developments and created a new, innovative service within the framework of the “EIP-AGRI innovation grant”.

The essence of their service is the further development and application of the Albrecht-Kinsey soil testing method in precision farming in order to maximize the utilization of nitrogen as a nutrient. The focus is on maximizing utilization! A new soil sampling procedure is used, which is not common for arable crops, neither there, in Germany, nor in Hungary. Samples are taken from three depths (30, 60, and 90 cm) by means of a special machine developed for this purpose, so the presence, accumulation, and leaching of nutrients can be examined and compared over several years. During the analysis of the data, recommendations for nutrient supplementation are made not only on the basis of the supply of macro-, meso-, and micro-elements, but also take into account the effects of the elements on each other, enhancing or inhibiting utilization. The georeferenced soil map created during sampling is supplemented with yield maps created during harvesting, and then the nutrient management proposal is prepared based on their analysis. Although the above practice is identical in several points to the nutrient management plan preparation practice used in precision farming, the innovation is the consideration of sampling depths and the effect of nutrients and elements on each other.

During the presentation, the participants prepared an analysis of this specific innovation, with the help of which the main steps and key actors of the innovation process, the necessary competencies, the environmental factors and the main elements of innovation could be identified.

The above methodology is very effective and significant from the point of view of environment protection and nature conservation, but it is more expensive than the currently used method. The project managers wanted to ask the advisors present for suggestions, to name possible market gaps, and what kind of financial incentives could be involved in spreading the method, and where and how the sustainable and environmentally conscious impact of the project could be communicated. Furthermore, they welcomed all comments that arouse during the analyses, so this determined the tasks for the next day as well. 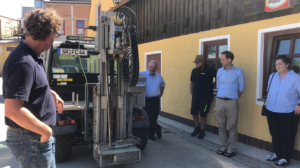 On the second professional day, the analysis of the innovation presented on the first day continued in three working groups using different methods. Such was, among others, the “relationship analysis”, the “innovation spiral”, the “circle of connections” or the “Canvas business model” analysis. The group work provided an opportunity for further, detailed analysis of the innovation. Sharing the revealed results with the other groups was an important part of the group analysis process. The results presented by the three working groups provided an opportunity for the advisors to make the proposals requested by the project managers for the further development of the given innovation. During the group analysis, the “two heads are better than one” principle proved to be effective in practice. Thanks to this, nearly 20 proposals for further development were collected.

During the last phase of the analysis of the interactive innovation, a short and straightforward sentence was prepared from the identified opportunities for further development, which the organizers will hand over to the managers of Farmtastic Consulting GmbH. This meant an additional information package that provides serious help for further development and the successful dissemination of the innovation. 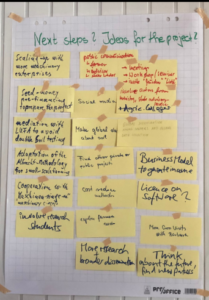 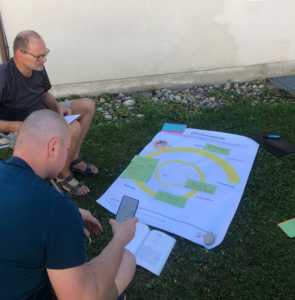 On the third day of the professional event, together with colleagues from each participating country, the structure and operation of the advisory network of the given country were presented. The experiences gained since 2014 were described. Every country has a different practice, but the Polish one is the most noteworthy, according to which there is a separate innovation agency in Poland that helps farmers from the ideas to implementation. 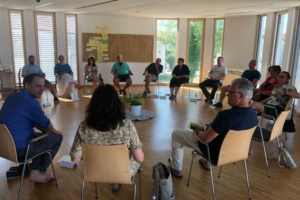 At the end of the program, the delegates reported individually on their cross-visit experiences and their most defining experiences.

Erika Andrási, agricultural and rural development advisor (Öko-Szféra Bt.) has 25 years of professional experience and works with nearly 100 partners. In addition to supporting administration, she deals with project development, preparation and management of investment proposals for his partners – together with her colleagues. By now, the SOIL and environmentally conscious farming have become her hobby-horse, so the presentation of the local innovative project was particularly interesting for her. Previously, she participated in several international projects and study tours, primarily in the field of nature conservation and animal husbandry.

“The small group tasks were the most decisive for me, during which professionals from different countries, coming from different areas of the profession, with different habits and experiences, were able to successfully solve the tasks by thinking together and paying attention to each other.

It is believed that the coffee break is the most valuable opportunity to build relationships at conferences and trainings. The German organizers also knew this eternal truth, so they paid special attention to team building. I am convinced that canoeing on the Danube greatly contributed to the successful group work, when the ability to pay attention to each other was absolutely necessary, not only for moving forward, but also for reaching the shore with dry feet. We can admit that more than 10 kilometers with perfect strangers in a canoe, several of whom were on the water for the first time, is no small task!

I am anxiously awaiting the feedback of the managers of Farmtastic Consulting GmbH from the organizers, and since my arrival home I have started looking for connection opportunities in Hungary.

Whether international relations will develop between the participants is also up to us, but there was a unanimous opinion that it would be worthwhile to continue the mutually inspiring common thinking that was formed during the three days, either during the following cross visits or by starting a new project based on this.

In addition to all this, what I brought home with me – unfortunately, the inimitable Bavarian draft beer could not be delivered – is the application of the Canvas business model for agricultural/rural development projects. This is absolutely timely at the start of the new financial cycle and the new application system.”

Ferenc László Kósa as an advisor (Agrártanácsádás Kft.) provides agricultural advisory services to nearly one hundred and seventy farmers, and tries to help the work of more than 50 advisor colleagues. “It was the first time in my work that I could gain international experience, which was such an experience that, in my opinion, every colleague should share. It was surprising to me that the farmers of each country work in very different economic structures in the respective countries and that they consult with their advisor colleagues on very different topics. The method of analysing the innovation relationship was completely new to me, which I will most likely be able to use in my further work. In addition to these, of course, establishing and maintaining international relations was the most useful for me.”

Miklós Sörfőző is a beekeeping advisor, researcher and beekeeper. As a manager (Exec-Bio Kft.), he places great emphasis on building and nurturing international beekeeping relations, as well as on international knowledge transfer, which is why they constantly monitor the world’s beekeeping innovations and beekeeping trends. “In beekeeping, just like in all agricultural sectors, developments and the implementation of innovations in practice are particularly important. Therefore, it was very useful for me to examine an interactive innovation in practice, to get to know the elements and to learn the use of analysis methods.” 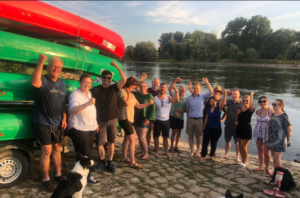